A Trip To Padar Island That Looks Like Surreal Island

Padar Island is the third of the biggest island included in the Komodo National Park in Indonesia. Located at province of the East Nusa Tenggara that most of the Indonesians will calling it as NTT (Nusa Tenggara Timur). The two largest islands of its predecessors are Komodo Island and Rinca Island.

The three of the above islands are mostly easier if you want to watch the Komodo dragons, but the most favourites for the tourists are the Komodo and Padar Island.

The view of the Padar Island itself from the top of the hill is so unique. Seems like it is the volcanic island and at the same time, looks like the wing or another body part of the dragon as in the movie. See the below image for what I mean by assuming like that. 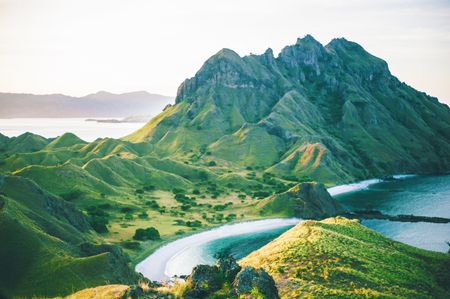 Padar Island is not a populated island, so you won’t find any of the villages in here. If by any chances you are meeting with the residents, they may have came from the another island for looking for the foods, hunting or anything else to fulfill their daily needs. Even, none of the building in this island.

So it is not only as one of the original habitat for the dragons, but also quite a strange for the human being. A really calming island because you won’t be hearing the crowd in here. Thanks to the development of tourism, now many of us could comes to the Padar Island, safely by using the boat.

The contours of the island is hilly, no wonder that you will see many of the above photographs uploaded by many of the travellers online in their social medias. Its island shape is also looked like the the starfish with some of the branched legs, so that, it getting more unique and becoming one of the interest for the traveller. And for those who love the instagramable images, I suggest you to be here one day. Its worth it.

There are some of the hills at the Padar Island. But since they are quite high and steep to be trekked, many of the travellers are even not allowed to hike on them for their safety. But to be honest, as a whole, the view of the island looks like a really surreal masterpiece. even feels like a dreamy island to me.

If you want to come to Padar Island, there is one way especially from the Labuan Bajo city where the nearest airport is existing called as the Komodo Airport. The trip to Padar Island will be takes for about 3,5 – 4 hours using the boat as it is the main transportation. Sounds like it will be the boring trip? Wait until you are departing from the dock.

On your way to the island, you will be served with the view of other islands and beautiful blue sea. Anyway, that’s for the short trip. If you wants the longer one, you could start your journey from Bali or Lombok where there are also many of the tour operators providing the same package as what you could get at Labuan Bajo.

Since you will be exposed to sunlight for hours on board or at the island, you’d better bringing your own sunblock with you. It is also because of the weather might be hotter. Don’t you forget to use the trekking shoes or sandals as well so you can move comfortable and safe while trekking on the Padar Island’s hill. And of course to prepare your camera at its best so you don’t miss any important moment and view on the island.

Unique Things You Can Do With a Hammock

Enjoy Your Weekend at Villas in Seminyak Near Beach

Bali Scuba Diving Courses To Reveal The Nature of Underwater