Things To Do For Your Komodo Island Tour

Have you ever heard about Flores Islands or East Nusa Tenggara in Indonesia? Or what about the Komodo Island? Yeah, for many of the travelers around the world, it may becomes one of the must visited island because of its instagrammable places. But not only that, experiencing for at least a one day trip for your Komodo Island tour will likely be your unforgettable moment of your lifetime.

Believe me, getting your own Komodo Island tour may sounds exaggerate. But when it comes to spoiling your own life, then here I have listed what actually you could get if by any chances you could traveling to Komodo Island some day. You could also choose another one or other islands existed at the province of East Nusa Tenggara since it is an archipelago, but because of the main destination for tourism is the Komodo Island itself, then the local governments and all related stakeholders must have been put all of their interests to build the island.

Things to do for your Komodo Island tour

There are at least some things you could do and enjoy while traveling at Komodo Island. Some of them are the common things and the rests are being more specific that probably even could not be seen at anywhere.

You won’t not only trekking to the top of the hills and simply just to enjoy the island view or the horizon before your eyes, but also that’s the way how you will find or meet the Komodo dragon. Many were doing this whether at Komodo Island or at Rinca Island since there is a thing like a guarantee to meet the biggest lizard on earth over the 2 islands. The Komodo Island itself is really well-known of its dragons since a long time ago, and not only in Indonesia but also around the world. Many have came as an traveler, scientists, naturalists, and many more, so it is may a good plan if Komodo Island tour will be taking you here very soon. 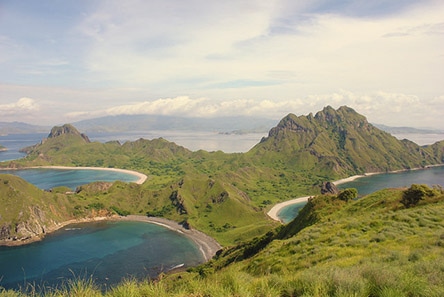 Trekking at these 2 islands won’t make you rush. Even they are relatively relaxed with the terrain or field that is quite flat. The total times it might needs to be spent for the trekking itself is around 1-1.5 hours. So you may need to prepare your cotton-based clothes to be wear and  help you in absorbing the sweat. So with the mountain shoes or sandals.

Anyway, I am included the Rinca Island in this list while you may think that “I thought it is about the Komodo Island alone?!”, because when you get your own Komodo Island tour package, many of the tour packages will likely to accompany you to not only to one island. And there is a big chance that Rinca is one of them.

2. Snorkeling and diving, pink beach and its hill

You will not only coming here to meet the Komodo dragons, won’t you? The best parts of your next destination for the Komodo Island tour are; you are welcomed for snorkeling and diving in this island with many of its beautiful and various marine biota and species, crystal clear water, pink beach that only existed in hundreds around the world and behind and side of this beach, you will also find the better landscape view over the hills. And they are really close to one another so you could save more of your times.

If you are interested to do all the above lists, you’d better call or get in touch with your trusted travel agent right away. But if you have not find one, feel free to do some online researches for gathering more information as possible, then book your Komodo Island tour package.